Home of the Hottest Hot Wings 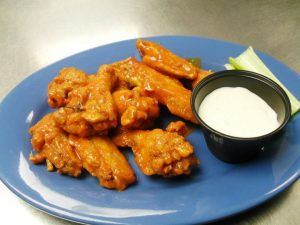 Bad Boyz Bistro offers casual dining in a fun atmosphere right in the heart of historic downtown Bedford, PA. Our menu features a selection of uniquely satisfying and delicious meals. Stop by and dive right into some of the best burgers and entrees in central Pennsylvania. If you’re up for a true challenge, you’re in luck. Bad Boyz Bistro is the Home of the Hottest Hot Wings. Try them. We dare you. Our aptly named Wings from Hell are so hot they singe the devil himself.

Our name, Bad Boyz Bistro, has drawn a lot of attention in the past. There has been much gossip and speculation, so we’re here to set the record straight. Bryan Speck has always been known as a fun-loving “Bad Boy.” After years of hard work pursuing his true passion, creating delicious food, and achieving many years of success in the culinary world, Bryan decided to offer Bedford a taste of the experience that led him to pursue his dream. When the dust settled and it came time to name his new restaurant, his rambunctious childhood and wild teenaged years came to mind, as well as our shared fascination with the famous and amusing “bad boys” from film, sports, politics, and more. The name “Bad Boyz Bistro” was the obvious choice. With great food and a focus on good times, Bryan invites you to enjoy quality time with friends and family in our lighthearted themed atmosphere.

In April of 2011, Bad Boyz Bistro was featured on the Food Network’s new hit show Outrageous Food! Our Wings from Hell draw in hot wing lovers from across the nation and around the world. Tom Pizzica is an experienced executive chef with a taste for the bizarre. He tours the United States to seek out the most extreme, jaw-dropping foods. Tom stopped in to try our wings, and we were thrilled to meet him! Check out some clips from his visit with Bryan at Bad Boyz Bistro: